Live from the sharing center

Sir, at the outset, may we congratulate you for having “fought from the front

Sir, at the outset, may we congratulate you for having “fought from the front and leading from the front” at this unprecedented and extremely difficult period for our nation as well as the world. Thank you and congratulations. Sir, to put it in perspective, you ensured that ports functioned, we have not had a single death in the shipping and ports sector, through the quarantine laws you ensured the safe return of Indian seafarers home, you assisted trade with proactive assistance from the port authorities and other stakeholders to the trade and much more.

Q: SIR, NOW WITH THE SLOW AND GRADUAL OPENING UP OF THE ECONOMY AND OUR NATION WHAT DO YOU SEE AS THE MAJOR CHALLENGES THAT WILL CONFRONT YOU IN THE PORT SECTOR, ON THE SHIPPING SECTOR, ON THE PORT CONNECTIVITY AND EVACUATION ACTIVITY, ON THE COASTAL SHIPPING FRONT, ON THE SHIPBUILDING AND REPAIRS FRONT AND ON THE INLAND WATER TRANSPORT FRONT?

Ans : At the outset, let me express my thanks for my team at the central ministry level, as well as our teams at port level ably, led by the chairman, Dy. chairman and all the employees of the ports as also the stakeholders of our closeknit maritime community.

Yes it is indeed a giant challenge ahead of us across all the sectors that you have mentioned.

As you may be already aware that we are already working on a “2030 Maritime Vision” document which will be completed shortly. This challenge of COVID-19 that we have faced and will continue to face has probably given us an opportunity to reset ourselves. The fact is India has to be prepared to be a $5 trillion economy. Port, Maritime, Shipping and Logistics has a large role to play in making that happen. Productivity, efficiency, competitiveness, ease of doing business, and growth are the cornerstones of our guiding principles. Ports, terminals, connectivity projects, shipyards, coastal shipping, and inland water transport will all be nurtured, encouraged, and pushed to follow the principles that I have mentioned above.

Q: SIR, ONE OF THE EXPECTED CONSEQUENCES IS A MAJOR SLOWDOWN OF THE ECONOMY WHICH IS LIKELY TO TAKE SOME TIME TO RECOVER, RESULTING IN A SHARP DECLINE IN VOLUMES OF CARGO AT ALL OUR INDIAN PORTS. ENERGY COMMODITIES LIKE POL AND COAL WHICH CONSTITUTE ALMOST 50%-55% OF COMMODITY MIX HAVE SEEN A LARGE DROP, CONTAINER TRAFFIC TOO HAS SEEN A LARGE DROP, AND CRUISE SHIPPING HAS BEEN COMPLETELY STOPPED. SIR, HOW DO YOU VIEW THE REVIVAL?

Ans : On the one hand, yes, it is true that there has been a major effect on our sector due to a sharp drop and decline in volumes. On the other hand, one should also remember that there have been several sectors which have been less affected and showing a quicker sign of revival such as fertilizer, agriculture products or the steel sector, especially on the east coast of India. To give you a live example even during the lockdown period transportation by barges of fly ash from India to Bangladesh continued to happen after just a short break. This was in the inland waterways sector. You can be rest assured that we, as the Government of India, are cognizant of the challenges that we all face and shall put in effort to surmount these challenges.

Let us also not forget that the whole world is combating these challenges together. Take cruise shipping, for example, international operators have been establishing new SOP’s and protocols which should enable the cruise industry to restart. As India, we should be ready to welcome those ships when they restart.

Q: SIR, A LARGE PART OF OUR INDUSTRY IS HIGHLY CAPITAL INTENSIVE. THIS APPLIES TO PORTS AND TERMINALS, INLAND CONTAINER AND CARGO TERMINALS, SHIP OWNING, SHIPYARDS, RAILWAY AND TRANSPORT FLEET, ETC. DUE TO THE LOSS OF VOLUMES AND THE EXPECTED SLOW RECOVERY TIME FOR VOLUME NORMALCY TO BE RESTORED, MANY BUSINESSES ARE GETTING INTO FINANCIALLY STRESSED CONDITIONS. THE INDUSTRY WOULD HAVE NO OTHER OPTION BUT TO LOOK TO YOU FOR GUIDANCE, LEADERSHIP, AND HELP?

Ans : Yes, we are very much aware of that and as you may know, we have been having discussions with various affected stakeholders with problems. At the very outset, we had asked the ports to give relaxation for payment of lease rentals, also revenue share of payments, and also MGT payments. We will continue to be engaged with all the participants to find as many solutions as possible.

Q: SIR, WITH THE NEW TYPE OF BUSINESS AND SOCIAL INTERACTION THAT IS EXPECTED TO BE THE NEW NORMAL, DIGITALIZATION AND E WORK WILL BE MANDATORY. HOW DO YOU SEE THE INDIAN MARITIME SECTOR PREPARING FOR THAT?

Ans : As you know that since the last year or so we have worked to get all our ports working digitalized for their processes and accounting and documentation. You will also see that our inland water transport sector has seen the significant deployment of digital technology across the rivers and also landbased operations. Our port community system has been implemented and it is gratifying to know that some other countries would also like to adopt our system. We are quickly expanding the port community system to also enable the complete chain of E-documentation whether it be E B/L, E D/O, E L/C. We are also getting our Directorate General of shipping to be fully digital. So yes, your point is very correct and we are working on the same.

Sir we thank you for having spared this time for our readers and on behalf of them and trade we wish you SAFETY and SUCCESS. 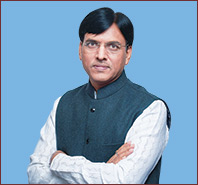 Mr. Mansukh Mandaviya is the Minister of State (Independent Charge) for Ministry of Shipping and Minister of State for Chemical & Fertilizers in Government of India. Mr. Mandaviya was born in a small village named Hanol in Palitana district of Gujarat state in a middle-class farmer’s family. He holds a Postgraduate degree in Political Science from Bhavnagar University.

Mr. Mandaviya was very active in politics and serving people since his youth. He became a member of Akhil Bharatiya Vidyarthi Parishad (ABVP) and soon he grabbed his position as a state executive committee member of ABVP, Gujarat unit. Seeing his intellect, skills and the zeal to work hard he was appointed as a leader of Yuva Morcha and then the president of Palitana BJP unit. He also holds a record of being the youngest MLA in Gujarat.

Working hard to serve the people and uplifting them was his only goal and thus he organized two Padyatras of 123 km and 127 km for the cause of Girl Education, Beti Bachao, Beti Padhao and Vayasan Hatao. At a young age of 38, he was elected as a member of Rajya Sabha. He was also a part of various standing committees in various fields.

Mr. Mandaviya is well known for his intellectual analysis and thought leadership, which he also exhibited in his speech on “2030 Agenda for Sustainable Development” at the United Nations. He has travelled to lot many countries to explore their policies and management to help India grow at the fastest pace.

On 5th July 2016, he sworn in as a Minister of State for Road Transport & Highways, Shipping and Chemical & Fertilizers in Government of India. Serving as a minister, he has implemented a lot of plans and thoughts to get the work done quickly and efficiently.

He was re-selected for the second term for Member of Parliament, Rajya Sabha during March, 2018.

With his decisive and bold leadership, he has helped increasing the per day road construction speed, decreasing the cost of Urea and other fertilizers, establishing more than 4000 Jan Aushadhi stores to provide more than 800 medicines at affordable rates and reducing the cost of heart stent and knee implants. Above this, he has not left any stone unturned to help the common man, farmers and businesses.

Mandaviya has been a part of various delegations, twice with the President and once with vice president to sign MOUs and develop bilateral relations with other Nations. In the Asian continent he has visited China, Israel, Oman, Nepal, Dubai and Uzbekistan. He also visited European countries like England and Germany, South American countries like Brazil and Argentina. He has visited lot many countries of Africa like Kenya, Uganda, Tanzania, Rwanda, Algeria, Hungary, Equatorial Guinea, Swaziland and Zambia. In an Oceania Region Shri Mandaviya visited New Zealand, Tonga, Fiji and Australia.

He has played a vital role in the growth and development of New India with his hard work, organizational skills and intellect.

In conversation with Mr DIBYENDU BOSE, VP Of TATA STEEL

In conversation with Mr. RAMESH HARIANI,MD Of, G. R. ENGINEERING

J. M. Baxi & Co. have recorded the handling of the heaviest packages as a Lift On/Off operation from Mumbai port,